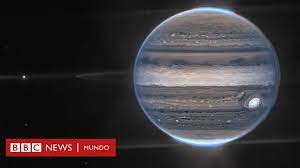 The telescope uses the infrared camera to click these images, which uses infrared radiation to identify the substances in space. It also used to detect celestial bodies such as planets, stars, and nebulae, which are usually not visible to the human eye.

The telescope has clicked the two images. The first image shows Jupiter with the spins of diverse colors. Northern and Southern Auroras of Jupiter have been shown in the image with the bright orange lights at the top and bottom of the planet.

The image also includes the Great Red Spot of Jupiter that has been captured in the white as it is reproducing sits and sunlight at a high altitude. 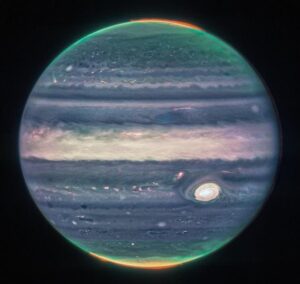 The second image shows a broader sight of Jupiter, comprising its rings that are a million times fainter than the planet. We can see two moons of Jupiter in the second image, Adrastea, and Amalthea, which have been located to the left side of the image.

However, the rest of the image includes the darkness of space and we can see some fuzzy spot in the lower portion of the second image, which is in reality very small and faint galaxies blooming from a far distance in space.

James Webb Space Telescope is a joint venture led by the US space agency NASA, European Space Agency, and the Canadian Space Agency. The telescope was launched in December 2021.